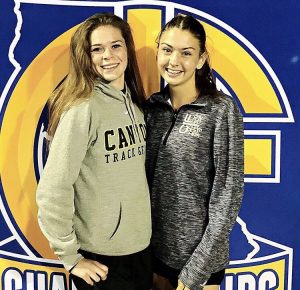 Fresno, CA – The California State Meet, one of the premier track meets in the United States, saw Canyon’s pair of distance runners Emma Hadley and Isabella Frisone. Typically it takes athletes two or three years to qualify for the State Meet, these two achieved the feat in their first year. The “Road to State” is quite the trip when you consider the performances that the two freshmen had to put down week after week to get to State.

The Southern Section is composed of some of the best talent in the State, if not the country, and this is the section we get to compete against almost every weekend. It’s a blessing and a curse, on one hand you get to compete against the best, and on the other, you may never know what it feels like to cross the line first. Just to get out of our league, the coaches were already tense knowing there were several girls who could take their spots if races weren’t run properly. From there it took CIF Prelims, CIF Finals, and CIF Masters for these two to book their tickets to Fresno. It took times the pair had never run before, Emma would PR by three seconds in just over a month in the 1600 to get to the State Meet running 4:51, and Bella would PR just shy of an entire minute in the 3200m and run a total of 11 8-lapped races to get her to State.

The “Road to State” is not an easy one, but these two were able to overcome obstacles just to reach this platform. Obstacles such as your home track under construction practically the entire season, and holding practice out of an old metal shop. This would not deter the two athletes from showing up ready to work, ready to get better, and ready to do whatever it took to reach the next level. It would be this kind of resilience that got these two to this level, and it is scary to think that with a proper training site with the right tools how fast they can get. It’s easy to forget that they still have three more years of high school to hone their craft.

Emma Hadley started off the meet with her 1600m prelims on Friday running 4:54.33. The race was fast from the start with Emma positioned on the outside of the first lane keeping an eye on the 4 leaders in front of her. She would use this tactic for the next two laps until there was separation where she skillfully responded making up the stagger. This would prove to be the decisive move separating her from the majority of runners. It was a rewarding effort as it was enough to get her to Saturday’s final. When it has counted most Emma has run some of her biggest races, dating back to League Finals, she has run 4:55 or faster 4 out of the 5 races leading up to State Finals. That is consistently being able to give your best effort week after week no matter the circumstance.

One circumstance Emma had not faced yet was running back to back 1600s, which would be a tough feat to handle. This did not keep the freshman from toeing the line for the 1600m final against the 11 fastest milers in the State. She would need a similar

performance from the day before to reach the podium, the pace got out hot with two runners exchanging leads slightly ahead of the pack. Emma would be right around her pace through 800, but the rest of the pack had already gone through before her. Emma Hadley does not give up, and you could tell from her stride that she wasn’t going to give up without a fight. She would fight to stay close to the pack that was gearing up for the final lap, but it wasn’t enough to put her in a good position. Hadley would cross the line taking 12th in the Girls’ 1600m State Final running 5:03.53. This isn’t the time or place that she would’ve wanted, but it’s promising knowing she has time on her side to improve.

Bella’s road to the State Meet saw her garner a lot of distance to get to this point. Mentioning my earlier point, the freshman ran 11 two miles this season. She’d start the season running 11:35 in her first two mile ever at the Mustang Roundup Invitational, fast forward to just last week and she nearly took a minute off her time running 10:37.65 at the CIF Masters meet. On average it takes runners another season of experience to notch a PR of that size, but that wasn’t the case for Frisone. The freshman would take seconds and seconds off her time leading her to the State Meet where she would go up against the fastest two milers in the State. Almost immediately the race would get off to a fast start getting her through the first two laps in a modest 2 minutes and 34 seconds (note this is around Frisone’s current mile pace). This pace was not only suffering to her, but the rest of the field. Bella would use her ability to adapt to the race around her, and hang on for the next 6 laps. The second half of her race was done predominantly on her own, as she was caught in no man’s land, a place no runner likes to be caught in between. Frisone knew that she was far off a podium finish, but just like her teammate in the 1600m, she would not give up the fight until she crossed the line. After 8 grueling laps, the freshman would finish just under the 11-minute barrier for the 5th time this season running 10:57.16 taking 19th out of 27 runners.

Although the season did not end with our two runners atop any podium, it can go without saying how proud we are of Emma and Bella. They showed us that limits do not exist; it’s a mindset that we put on ourselves. Hard work and positivity will take you far. We look forward to seeing them take their talents higher as we prepare for what’s next. With the season now over, we set our sights towards cross-country this fall. 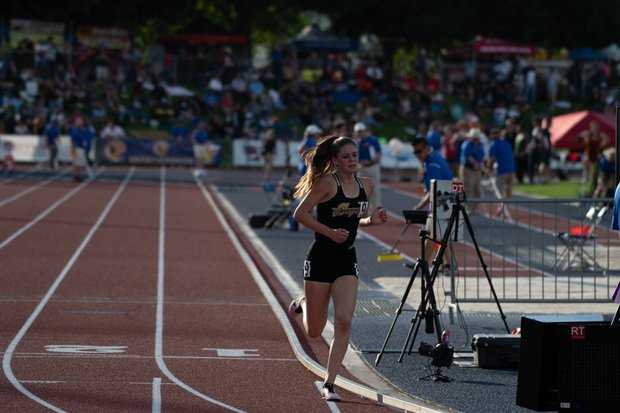 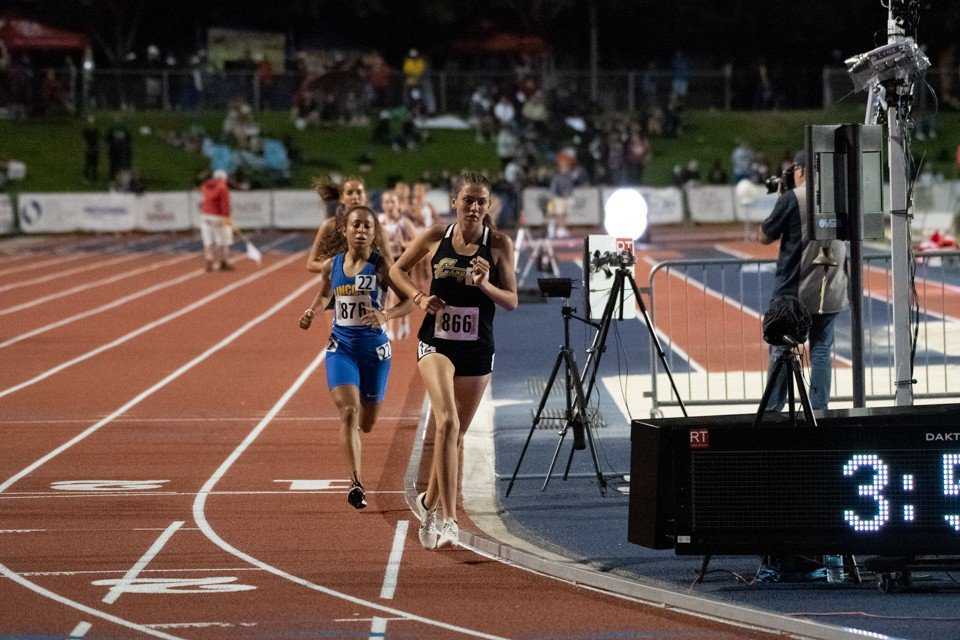