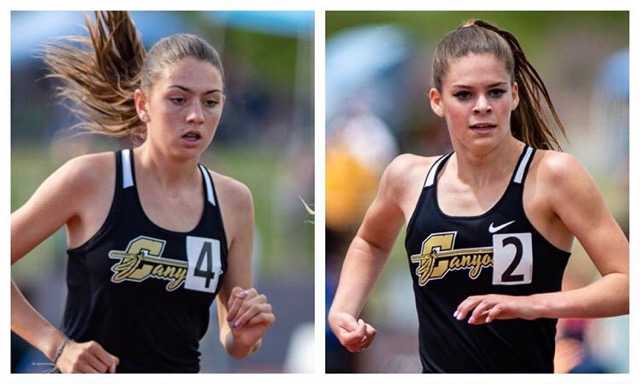 El Camino College – It was a nerve-wracking day for coaches, family and friends watching Canyon’s three athletes Emma Hadley, Isabella Frisone, and Jake Porter compete against the best of the best in the Southern Section. Emotions were high, and the stage was set as competition got underway. On the line was a chance to qualify for the CIF State Championships, the highest tier of competition for high school track and field.

Emma Hadley took her spot on the line in the girls’ 1600m, and was ready to put it all on the line to ensure her spot in Fresno. With a crack of the gun the race was off, and Hadley stuck herself in the back of the pack giving her the best view of any move she would need to handle. She would sit throughout the majority of the race, but when it came time to finish, Hadley showed up. With 300m to go, Emma moved on the pack and started to surge. Fatima Cortes and Audrey Suarez separated themselves finishing 1-2, with Hadley crossing the line soon after in 4th finishing with a new PR of 4:51.01. The time and place would be good enough to earn her a spot at the CIF State Championships, and lowers her school record. The freshman knew that patience was needed to move on, and she showed her poise with this performance. At the State Meet, she will need to be firing on all cylinders to reach the top of the podium, but with her outstanding season thus far Hadley will be up for the challenge.

Once again her teammate, Isabella Frisone, would later finish up the meet in the girls’ 3200m doing her best to race against the best distance runners in the Southern Section. Frisone has come a long way from the beginning of her freshman year. Prior to the start of the season, Frisone thought she’d be running predominantly 800s and 1600s, but fast forward a couple of months and here she is toeing the line in the 8 lapped race. The beginning of the race would see the race go through the mile under 5:20, and after that breaks would start to form. Frisone was on the back end of the break, and with a mile to go, she was not in a position to qualify for the State Meet. This would not deter the freshman that would stay persistent in pace, and would slowly see two runners coming back to her. One would glance back to see where the runner from Canyon was, and that would be enough for Isabella to make her move finishing strong taking 5th in a new PR of 10:37.65. The top 6 move on to the State Meet meaning Frisone would squeeze her way in with her kick in the final 100 meters. Frisone has been able to show what it takes at each stage, the State Meet will be her biggest yet, the freshman is ready to step up to the plate.

Jake Porter competed in both discus and shot put over the weekend against strong competition. Porter would have his hands full in both events, and unfortunately would not have what it takes to move on to the next round. An emotional day for the junior who has his dreams set high will take time to reset mentally and physically. Nothing short of amazing for what he achieved this season. His support staff is immensely proud of him; two new school records, a pair of league titles and a whole lot of fun along the way.

Frisone and Hadley will have different strategies with Hadley set to run in the 1600m prelims on Friday where she will need to qualify in order to get to the Saturday 1600m final. Frisone will be set to run in the 3200m final on Saturday. The meet will take place at Buchanan High School in Clovis, CA with Fridays track events scheduled to start at 5:00pm and Saturdays will get underway at 6pm.