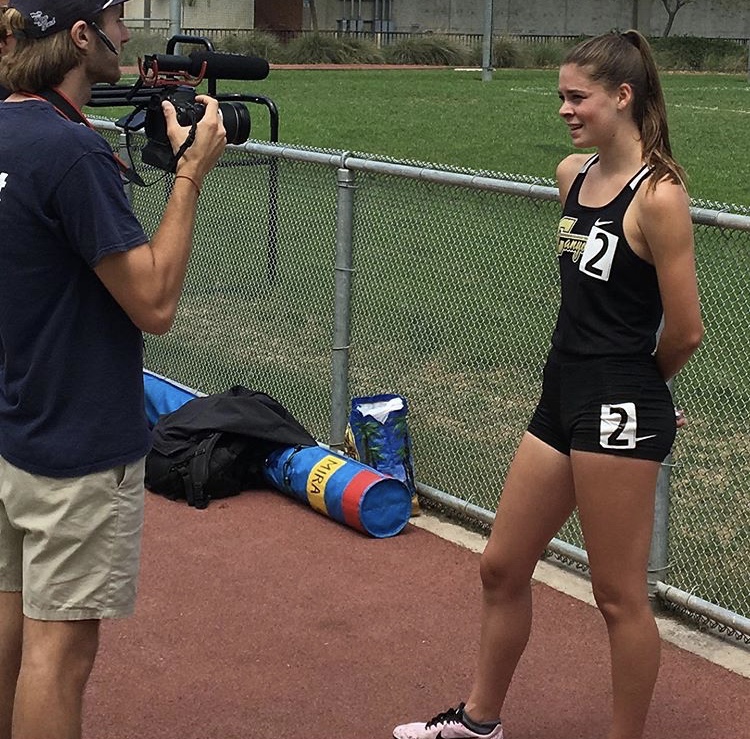 El Camino College – It was just how Hadley saw it going down, with 600m to go she would pass Hines, and make her move to gun for the win. The freshman took her experience from previous races this season, and confidently made the pass. The senior from Mission Viejo stood no chance after Hadley made her move, and slowly watched as the distance started to grow. At bell lap, Emma knew she would have to continue her move to hit a time that would be good enough to be in the Top 12 for all divisions. The Orange County 1600m Champion and new school record holder in the 800m and 1600m drove for the finish line with no one in sight to finish in 4:55.81 to Kelli Hine’s 5:01.45. Emma Hadley is your CIF-SS Final Division 2 1600m Champion, the first in Canyon High School’s history, and surely will not be her last. Hadley finished her race congratulating her competitors, and in high spirits took an interview discussing her race with MileSplit (link can be found down below) discussing her strategy, and giving props to her competitor from Mission Viejo.

The freshman came back to run in the 800m where she was in good position at bell lap, however a stutter in the pack caused Hadley to come to a complete stop losing her momentum. Hadley was able to make up the distance to get back with the pack, but in the 800m it is tough to get back up to top speed. Emma was still able to finish 5th in a time of 2:15.79 capturing points for her team. Hadley will now be able to focus on the 1600m at CIF-SS Masters next week back at El Camino College where she will take on the fastest milers in Southern Section. This will be one of the more exciting races next week to watch with all 12 runners within mere seconds of each other giving our freshman a shot at the title once again. A strong performance will give Hadley great odds at taking a trip up north to Fresno at the CIF California State Meet.

Inspired by her teammate’s performance, Isabella Frisone ran yet 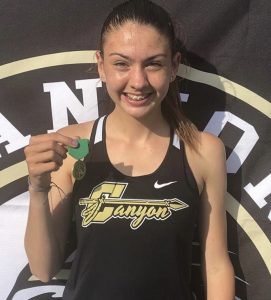 another strong 3200m to reach the next level of CIF earning her spot at the Masters meet. Prior to the race, the freshman can be found enjoying time with her teammates, but once she steps on the track she becomes all business. It is that kind of switch that gives Frisone the edge on her competition. Frisone’s race was run jointly with Division 3, however the two divisions were still separated by placing. The race was taken out fast by a runner from Northwood, but this would not deter Frisone, she would wait patiently until they passed the first mile where she would take over with a pack of 5 girls. Frisone stayed focus, and followed the pack before the talented junior from Ventura, Madeleine Locher, broke the pack taking the victory. Frisone kept her business-like focus and kicked on the last lap running 10:40.82, which would be a new PR for the freshman, and good enough for 4th place in Division 2. Following her race awaiting the final verdict of whether she would be moving on, she congratulated her competitors making new friends on the track showing how great the sport can be. Next week Frisone will put the friendship aside and battle for a spot to reach the highest level of competition in California at the CIF State Meet.

Off the track, Jake Porter continued to put in work in both 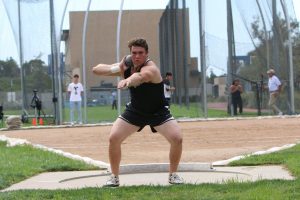 discus and shot put. An astonishing fact about Jake is that he is still somewhat new to the scene only making this his second year of competition. It is incredible to see how far he has come, and still how far he has to go in events that take time to hone. This would not stop the quick learning thrower to put himself up against some of the best throwers in the state of California. Jake started his day off throwing discus and quickly established himself with a throw of 158-10 ft. letting the rest of the competition know he wasn’t here to mess around. Porter’s next throw would get right over the 160 ft. mark putting him at 160-01 ft. which would be good enough for 5th in a tough Division 2 event. Interestingly enough, it would be Jake’s second best attempt that would give him the inch needed to move onto the next stage. Porter would reset and prep himself for his competition in shot put. Shot put would see a close competition between 5 throwers who all finished within one foot of each other in Division 2. Jake’s throws would be around the 52 ft. mark until his third throw where he hit 57-3.75 ft. solidifying his 5th place finish. Porter’s 5th place finish would earn him a spot at the CIF-SS Masters meet, and is what would be a first in a long time, if not ever done before, for a male thrower to make it this far in CIF competition from Canyon. Just another accolade for the junior to add as he sets the bar higher and higher giving himself motivation, as well as motivation for his teammates to continue to reach for new goals.

Jake’s teammate Sydney De Villa would alternate with him 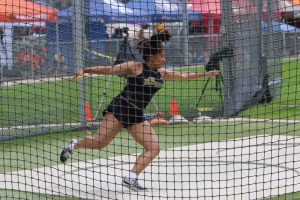 between shot put and discus, but it would be discus that would be the senior’s best event where she took 5th. The senior threw for 124-00 ft. on he third attempt earning 4 points in the team race. Sydney would take 8th in shot put earning a point there. De Villa would join Frisone and Hadley as scorers at CIF-SS Finals that would see the three finish tied 9th in the team rankings in Division 2 with 24 points between the three of them. A strong performance from three individuals shows a lot of promise with a growing team that will look to put more points on the board, and a shot at a Division 2 team title in the coming years.

In CIF, there are some that scratch events either to focus on 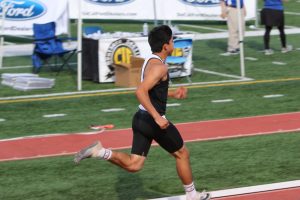 a different event or miscellaneous reasons that keep them from competing. This happened in the boys 200m where Angel Ledezma was able to compete due to a scratch giving him the opportunity to go up against the best in Division 2. The junior knew he was up against some fast sprinters, but took this opportunity to put himself on a new level. Ledezma would finish 7th in a time of 22.45 earning two points toward the team total helping Jake who earned 8 points on the day giving them 10 total. Angel is the first sprinter since the early to mid 2000s to compete in a sprint event for Canyon. With teammates like Keane Bui, Ethan Florez, and Andrew Lugo the future looks bright for a boys team to make some noise in Southern Section.

To move on from Masters, the three athletes from Canyon will need to either place in the top 6 of their respective events, or hit an at-large mark to get into the State Meet. CIF-SS Masters will take place back at El Camino College on Saturday 5/18 and will adhere to the following schedule:

Jake Porter – Starts the day off with discus at 11:30am (warm-ups at 10:30am) and will finish the day throwing shot following the conclusion of girls’ shot put that is also slated at 11:30am

Isabella Frisone – 3:20pm is the scheduled start time for the girls’ 3200m