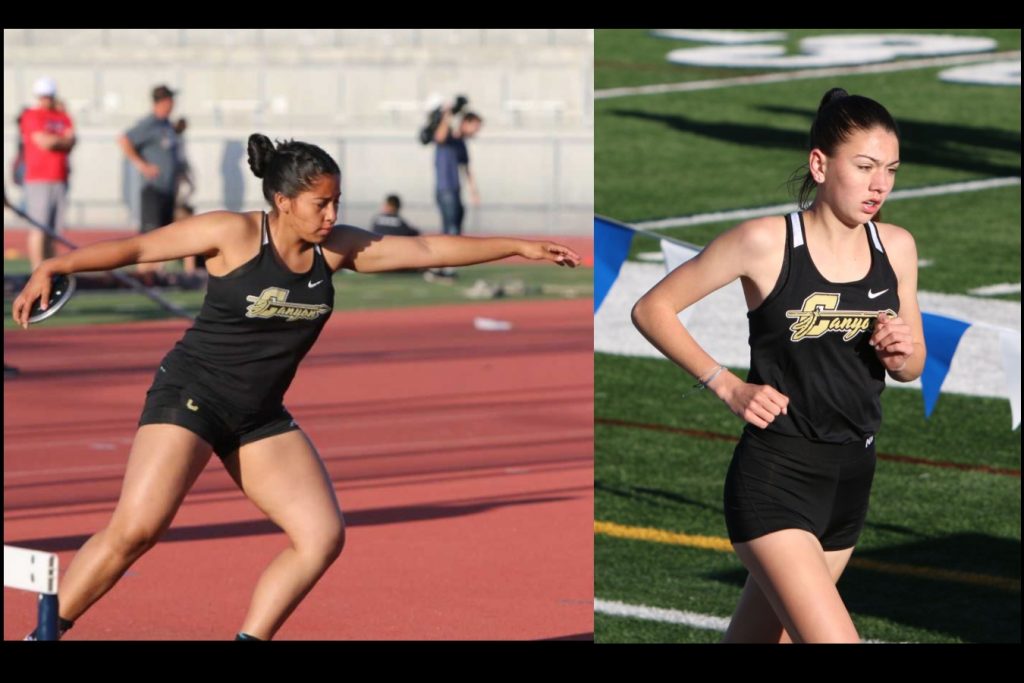 Moorpark, CA – Eighteen track & field athletes from Canyon competed head to head with the best in Division 2 Southern Section over the weekend. It was quite a showing for the Comanches who seemed to always be stepping on and off the track with another athlete. CIF-SS Division 2 Prelims show lights some of the best competition in the state of California, and four of Canyon’s best qualified for the next round, CIF-SS Finals. To get to CIF-SS Prelims is an accomplishment in itself, and we congratulate the fourteen other athletes whose season ended Saturday.

Emma Hadley was our first athlete to stamp her ticket to CIF-SS Finals in the girls’ 1600m and girls’ 800m. In the 1600m, the freshman took advantage of the pace early and never let up making sure that she achieved the auto-qualifier with her 1st place finish. Hadley was one of two to go under 5:05 on the day clocking a time of 5:04.72 in her heat. The other was that of Kelli Hines, out of Mission Viejo, who finished in a time of 5:01.21 in her heat. Hadley and Hines will be sure to put on an exciting show at CIF-SS Finals, as they have crossed paths multiple times this track season. One of the more notable races was just last month at Orange County Championships where Hadley and Hines duked it out in the 1600m where we saw Emma take down Hines on her home track. With a storied past, these two will not disappoint in the girls’ 1600m this weekend at El Camino College. Hadley would come back later in the day to qualify in the 800m as well running 2:16.49 to win her heat and hit the auto-qualifier. Hadley is a top seed in both events giving her great odds to take the win, she knows that its going to take everything she has to hold off fierce competition.

One of the more emotional, well-deserved performances of the day was that of senior Sydney De Villa who surprised herself with two qualifications in both shot put and discus. The senior was confident in her discus abilities, as that is her better event and was able to solidify her spot to CIF-SS Finals there with a throw of 121-02 ft on her 2nd attempt. This would be a new PR for the senior, and puts her in contention for a podium finish at Finals. Earlier in the day, however the senior would surprise her coaches, family, and even herself with a mark in the shot put that would be enough for a qualifier to CIF-SS Finals. On her first attempt, the senior threw the distance garnering a new PR of 37-8.75 ft. which would hold on to be good for 9th overall on the day. It was a surreal moment awaiting the CIF Official’s announcement that De Villa was the final qualifier. With tears in her eyes, she hugged her family and coach and respectfully congratulated the rest of her field on their performances. An interesting fact about De Villa’s discus abilities was up to this previous weekends results, De Villa was undefeated in the event, a notable feat to constantly be able to match and better her competitors in an event that holds very little for error.

Canyon’s loudest and proudest athlete, Jake Porter, took care of business in his events. He continues on his campaign in both shot put and discus showing a steady poise that has the junior throwing confidently at the right time. Porter started off his day throwing discus where we saw the utmost patience from the senior who started off with two below average throws that was on the line of qualifying or not qualifying. The junior knew what he was capable of and got back in the ring for his third attempt where he heaved a 152-03 ft throw which would be good enough to finish 5th on the day and earn him a spot at CIF-SS Finals. Porter came back in shot put where similarly to De Villa; he has found some newfound talent in the event. The junior followed in suit with his pattern from discus, and waited until his final attempt to hit his mark to solidify him to the next round of competition at Finals. Porter was just shy of his PR throwing 57-03.25 ft. finishing 4th in the event. The junior will have his hands full with strong talent out of Newport Harbor and Ventura, but with the way Porter has been handling his season, the junior should be confident with his abilities to get him to CIF-SS Masters.

Our last qualifier on the day would be another freshman from the distance squad in the girls’ 3200m, Isabella Frisone. A close race for the better part of the race saw Frisone in contention for a win, but junior Madeleine Locher out of Ventura had other plans. Locher kept her foot on the gas that kept the pace honest, and Frisone would not go down without a fight constantly putting in surges to put her in reach. Frisone stayed calm and kept herself in position to qualify with a strong finish that had her finish 3rd in her event with a time of 11:01.70. Only a freshman, Frisone continues to impress her coaches in an event that is typically dominated by upper classmen proving that it is possible to achieve goals if you put your mind to it. Always up for the test, Frisone will look to make a splash on the scene at CIF-SS Finals in the girls’ 3200m. Frisone’s training partner and teammate Sarah Paino is the first alternate in the girls’ 3200m at CIF-SS Finals meaning if one of the nine who qualified in the event dropped the event, Paino will be the first in.

CIF-SS Finals will take place at El Camino College on Saturday, May 11th with Field events starting at 11am and Running events beginning at 1pm. The meet is being run on an approximate schedule meaning the times are flexible and will do their best to run on time. In order to advance, distance athletes will need to place in the top 12 regardless of division to move on to CIF-SS Masters. In the field, the top 9 will move on to the next stage of competition.

Here is more information in regards to CIF-SS Finals: https://cifss.org/sport-news/2019-cif-ss-ford-track-and-field-divisional-championship-finals-saturday-may-11th-el-camino-college/

Again we would like to congratulate all others who performed at CIF-SS Prelims for Canyon. We are proud of your achievements, and are thankful for all that you do for your team.